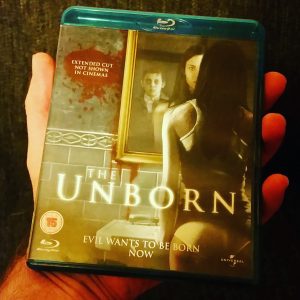 The Unborn is not offensively bad, but it’s not particularly great either. It’s about what you’d expect from a BluRay that cost a euro. There are two options for watching the film on the BluRay disc, a Theatrical version and an Extended/Uncut version. I chose the Extended one.

On the surface The Unborn has a lot going for it. There’s a creepy kid, a ghost that’s, well, ghostly. Some well known stars in smaller roles. Odette Annable as the beautiful, haunted, Casey, does a competent job. There’s the obligatory college friend, Romy, played by Meagan Good, and Cam Gigandet plays Casey’s loving boyfriend, Mark – both are okay. There’s a mystery involving Nazi scientists (I’ll say no more on that), and there’s even a dog… for dog-lovers, maybe? Is this an episode of Scooby Doo? Where’s Shaggy?

The main problem I have with The Unborn is that, echoing the ghostly boy on the cover, the plot fades in and out of existence. The rest of the time we’re presented with banalities, unnecessary (and ineffective) jump scares, and occasionally hilarious CGI (yes, I’m looking at you, old dude in wheelchair).

Gary Oldman pitches up in the latter half but it’s far too late. He can’t save the film. He conscripts Idris Elba but good old Luther can’t save it either. At one point there’s a hybrid Jewish-Christian exorcism. That sounds way more interesting in concept than execution. Maybe if they performed it on the director before they started shooting?

Ultimately, The Unborn is a bland, unscary “horror” film. Even Gary Oldman and Idris Elba, performing their hybrid exorcism on the director, probably couldn’t save this one… #1EuroBluRay